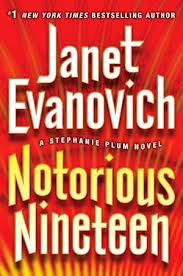 My Series Sunday pick is Notorious Nineteen, the 19th book in the Stephanie Plum series by Janet Evanovich. Cubbin is facing trial for embezzling from an assisted-living facility. Cousin Vinnie posted his bail, but Cubbin disappears from the hospital after an emergency surgery. It's up to Stephanie to find the skip. However, Cubbin has vanished without a trace. To earn money in the meantime, Stephanie accepts a job offer to guard sexy Ranger at an event. Another dull moment for what used to be my favorite bounty hunter.

I'm so over this series, I need a new word for 'over.' There is no element of surprise. It is way too predictable. Mystery? HA! What mystery? It's like Evanovich keeps a checklist for each book in the series.

Don't be alarmed. These are not spoilers. These are known factors for every single Stephanie Plum novel. On another note, a fellow book blogger Notorious Spinks pointed out certain passages in Janet Evanovich books that imply her opinion of black people. I didn't notice until this book in a shady worded sentence describing Lula. Does anyone else notice these racial references?

Nevertheless, check out the book trailer below and decide for yourself whether to read this installment of the Stephanie Plum series.