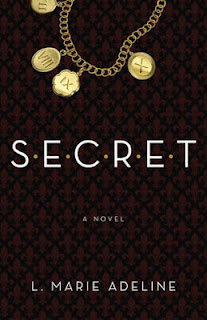 My Series Sunday pick is S.E.C.R.E.T., the first book in the Secret series by L. Marie Adeline. Cassie is a young widow whose life is filled with loneliness. Her life has become routine. Wait tables at work, home in her one-bedroom apartment with cat, repeat. But one day, a client at the café leaves behind a notebook. Cassie looks in the notebook hoping to find contact information for its owner and instead discovers explicit sexual confessions. The notebook eventually leads Cassie to an underground society called S.E.C.R.E.T. that helps women make their sexual fantasies come true in a ten-step journey.

No judgment. No limits. No shame.

I chose this book not because of the positive reviews or the many claims that this book is a page-turner (it's not), but because the author has my same name. (Although, L. Marie Adeline is a pseudonym for a bestselling author.) Some reviewers compare S.E.C.R.E.T. to the Fifty Shades and Crossfire series. I personally don't think it was as erotic but enjoyed the story and development of the main character nonetheless. I look forward to the second book of the S.E.C.R.E.T. series that is expected to be published in October. I am a sucker for a series and interested to know where this one will lead.