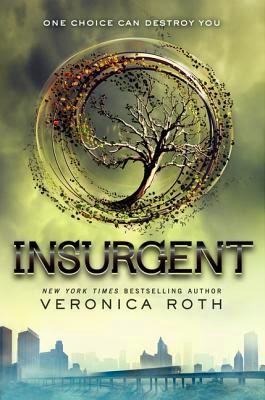 "Insurgent. Noun. A person who acts in opposition to the established authority, who is not necessarily regarded as a belligerent." ~ pg. 264

My Series Sunday pick is Insurgent, the second book in the Divergent trilogy by Veronica Roth. Beatrice "Tris" Prior lives in a futuristic Chicago. The city is divided into five factions (groups formed to seek a single-minded goal):

Tris' initiation day should have been celebratory. Instead, the day ended with a war among the factions in this second book of the series. Tris tries to save friends, family and even her enemies all while learning to embrace her divergence. The romance between Tris and Four still played a backseat role in this book.

How can I put this? I would be super pissed if I waited one year for this sequel. How was Insurgent a Goodreads Choice 2012 winner? Who voted for this? What in the entire fuck was this book about?! It is 300 pages of confusing action. I thought factions were realistic after I finished reading the first book of this trilogy, Divergent. I can totally see the world being divided into personality groups and controlled by the government. But if the chaos and disorder described in Insurgent is any indicator, I want no parts of it. What a disappointment. I barely want to finish this trilogy now.

WARNING: The book trailer below may fool you too.