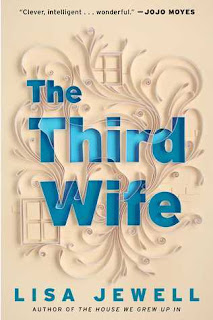 "It was starting to melt around the edges, like a tub of frozen ice cream left on the counter, the mass of it still there, hard and cold, but almost soft enough to be able to scoop it out without bending a spoon." ~ pg. 42

Goodreads recommends reading Lisa Jewell's The Third Wife if you like authors Jojo Moyes and Liane Moriarty. I have to agree. This novel is family drama with a side of dark familial mystery. It all begins with a drunk woman who lurched into the path of an oncoming bus. Unfortunate accident or suicide?

"Adrian had never intended for his life to get this convoluted. Two ex-wives. One late wife. Three sons. Two daughters. Three houses. And a cat." ~ pg. 21

Adrian Wolfe is a grief-stricken widow. He thought his marriage was perfect. So if his third wife's tragic accident was indeed a suicide, why did she do it? He investigates the cause one year after his third wife's death. His oldest son uncovers poison-pen e-mails sent to his late wife all beginning with "Dear Bitch." As he digs further, his seemingly perfect happy marriage of two years was sprinkled with disturbing secrets.

The extended family goes on annual trips, hang out on the weekends and overall get along fine due to the circumstances of broken homes. No one holds a grudge against Adrian for his habit of cheating on his wife and starting a new family with a mistress...twice guilty. The children get along well and appear to be each other's support system. I love that we get a glimpse into each child's personal life and struggles. Fortunately, the story alternates points of view and the author treats readers to flashbacks of Maya, the third wife, in the months leading up to her death. The characters of The Third Wife are so well-developed.

"Like an abrupt end to a really good book, frantically thumbing through the pages to see if he'd missed a bit, bewildered and rudderless." ~ pg. 36

The Third Wife is indeed a really good book. Like the quote above, I actually did thumb through the pages frantically getting to the end but at times, went back a couple chapters to see if I'd missed something. The mystery was written in such a way that I suspected damn near everyone except Billie the cat. Every character earned suspicion. Unpredictable by all means. Lisa Jewell, you did that! The Third Wife earned a spot in my top books read of 2015.