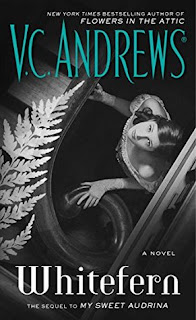 My Series Sunday pick is Whitefern, the sequel to My Sweet Audrina by V.C. Andrews. Whitefern was Audrina's prison. The mansion swallowed Audrina's childhood and threatens her adult life too. She thought things would change for the better after the death of her overprotective father. But her husband, Arden, seems just as ambitious and cruel. When her father's will leaves Audrina with 51% of the family business, Audrina realizes she cannot easily escape the dark halls of home.

"What could possibly be worse than the horrors fate already had chosen to rain down on Whitefern?" ~ 12%

I watched the Lifetime movie adaptation of My Sweet Audrina to refresh my memory with fine details of the story. Even though there were not-so-minor changes (such as Audrina's sister dying in the womb versus growing up a fragile girl), I was reminded on how this book was strange from the start.

I began reading the advance copy of the "long-awaited" sequel immediately after watching the movie. This is where I insert a serious side-eye because are there really people out here waiting on this sequel over 25 years later? Am I the only reader that was not pressed for this story to continue?

Whitefern, to be published this Tuesday, July 26, may be disappointing to the readers supposedly waiting for it. The story does not flow. The scenes are choppy and not consistent with the original book. What are meant to be twists come across as random curveballs. Ghostwriters team, stop! I read the first Audrina book when I was young in my V.C. Andrews stan days; it was weird back then and the sequel is weird today. The cover is striking though.