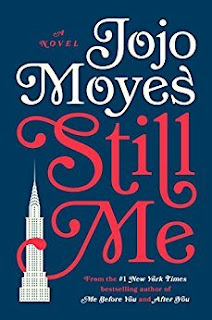 My Series Sunday pick is Still Me, the third book in the Me Before You series by Jojo Moyes.

"When you get to my age, the pile of regrets becomes so huge it can obscure the view terribly." ~ 88%

I did not like the second book of this series titled After You. Frankly, it was because I didn't care about Louisa Clark's life after losing her true love. But once I saw the movie adaptation of Me Before You, it brought the character to life. I anticipated reading this new release hoping it would renew my interest in the series.

Hmmm, not so much. Lou is still quirky and fun as ever. She is also still indecisive and sometimes flighty. Mixing in with New York high society has her torn between two worlds. Her boyfriend, Ambulance Sam, is still thousands of miles away. Then she meets Joshua Ryan who reminds her of the past. Where exactly does Lou and her heart belong?

Well before the end, I knew what the likely outcome would be. But my goodness it dragged getting there. It solidifies my original thought that there is no need for this to be a series. We were fine with just Me Before You. But for those like me who feel obligated to finish out a series, borrow it from your local public library when it is available.