Series Sunday: A Deadly Inside Scoop 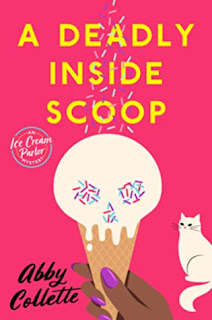 "Women, when they commit murder, like to use poisons and heavy objects. Men like guns and knives." ~ 54%

My Series Sunday pick is A Deadly Inside Scoop, the first book in the new Ice Cream Parlor Mystery series by Abby Collette. There is no fiction sweeter than a charming cozy mystery set in an ice cream parlor. The bonus is if it features a woman of color. Introducing Bronwyn "Win" Crewse! The recent MBA grad left New York to return home and run the family's ice cream parlor in Chagrin Falls, Ohio. She has worked hard to renovate Crewse Creamery from a novelty shop with a lottery machine to an upscale spot with a view of falls and custom ice cream made in-house by hand.

Just her luck, there were construction delays causing opening day to fall on the same day as early first snow. Who wants ice cream on a cold winter day? The entire first day goes by without any customers. What is worse is Win finds a body in the snow in the wee hours. It is not her business and she has no interest in solving the murder until her father is named a suspect.

Like all small town cozy mysteries, murder rarely happens. The small town outside of Cleveland, Ohio, is no exception. Though the pacing is a bit off. The dead body wasn't discovered until the very last sentence of Chapter 6. The victim was finally identified a third into the book. Kind of a late start to the mystery peppered with minor grammatical errors. Nevertheless, Win and her slightly annoying best friend, Maisie, are natural amateur sleuths. I like their teamwork, ideas and dialogue. Win's supportive close-knit family is also a bonus. I'm looking forward to the next book in series and recommend to all.

Kudos to the author for her descriptive narrative. I could picture the entire look of the shop through words. It was the right amount of detail without becoming too wordy. I could almost taste the ice cream flavors: Ghoulish Blueberry with fresh blueberries from a local farm; Caramel Corn made with actual corn from a cob; Cherry Chocolate Chunk Amaretto; Pralines and Cream made with sweet caramel, salty pecans and split vanilla beans. Even better, the author gifts readers with select ice cream recipes. What a yummy treat!

Happy Early Pub Day, Abby Collette! A Deadly Inside Scoop will be available Tuesday, May 12.