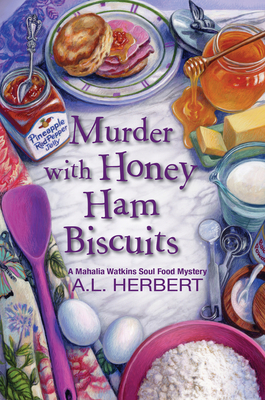 My Series Sunday pick is Murder with Honey Ham Biscuits, the fourth book in the Mahalia Watkins Soul Food mystery series by A.L. Herbert. Everyone in Maryland knows Mahalia Watkins is known for homemade southern food. Her cooking skills are to be admired. Hence, why she is invited to serve as a guest judge on a cooking competition show to be aired on national TV. Throw in a longtime restaurant competitor, a crass mogul, shady production/film crew and cutthroat finalists. A whole slew of suspects when the frontrunner is found dead. Of course, Halia sorts through clues to identify the murderer.
"Just throw in a 'Girl!' every now and then...or a 'oh no he di'int.'" ~ 15%
I was on the fence about whether to continue reading this series. Certainly not because of the content. The storylines are anything but stale. However, I have a strong side-eye upon discovering the author is a Latino male writing a series featuring a black female. Suddenly the loud wig-wearing relative, soul food references and dialogue seemed stereotypical. The characters' names, Halia and Wavonne, were a little too cultural. The author not doing personal appearances and keeping his identity somewhat hidden seemed more misleading. Is this practice of tapping into a new market acceptable? But damn, are these stories good! So I chose to stick with the Mahalia Watkins Soul Food mystery series and was granted an advance readers copy.
"I don't think so, but it wasn't that long ago that someone was stabbed to death over a Popeye's chicken sandwich, so people have certainly killed for less." ~ 69%
Like most cozy mysteries, Murder with Honey Ham Biscuits is full of laughs, mouthwatering recipes and outlandish antics. Per usual, Wavonne still sees her way into conversation that is none of her business. Mahalia is still bossy, or as she prefers to be called, a strong leader and helluva amateur sleuth. My only con is how long it took for the murder to occur (at 53%). The opportunity was there but just didn't happen during the first half of the book. As a result, the murder solving was a bit rushed.
Just read it, bookhearts. All author issues aside, the mystery was revealed with twists and the main characters are still lovable. If you are new to the series, check out my previous reviews. If you are hesitant in continuing to read about Halia and 'nem, then let me nudge you towards picking this book up, brewing a pitcher of sweet tea and settling in for a good read.
Disclaimer: An advance copy was received directly from the publisher in exchange for an honest review. Opinions are my own and would be the same if I spent my hard-earned coins.
Title: Murder with Honey Ham Biscuits
Author: A.L. Herbert
Published: July 2020
Pages: 272
Edition: Galley
Rating: 🖤 🖤 🖤 🖤