Series Sunday: A Game of Cones 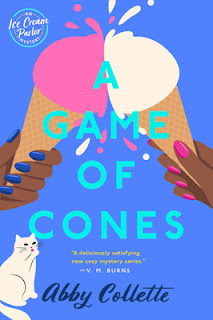 "It's not revitalization. It's gentrification." ~ 5%
My Series Sunday pick is A Game of Cones, the second book in the Ice Cream Parlor Mystery series by Abby Collette. No case is too cold to crack! Being an amateur sleuth takes skill. You have to come up with something the police hadn't already thought of. You likely already have a personal relationship with the suspects, assuming you live in a small town. So needing to put aside your bias and truly solve a murder while running your small business is impressive!
Bronwyn "Win" Crewse is the resident amateur sleuth working her second murder. But let's back up a bit. Crewse Creamery is the only black-owned shop in a predominantly white suburb called Chagrin Falls in Ohio. The family business has been in the same spot for 56 years. But when a big city developer comes to town with plans to build a mini mall, you can imagine the reaction he got from long-term business owners and residents. It is hard to identify his killer when everyone has a motive.
"People will treat their business like it's their baby." ~ 72%
Bookhearts know that I love a cozy mystery. Sprinkle in delightful supporting characters and easy-to-follow-in-real-life recipes. The key ingredient, though, is the main character. I found Win a bit loopy-minded at times but overall she is a likable character. Abby Collette has a way of developing female leads of color that can easily be a cousin or neighbor in readers' lives.
Too bad I was not offered a physical copy of A Game of Cones. It has a title that will draw attention from GoT fans and such a cute cover featuring chocolate manicured hands holding single scoop vanilla and strawberry ice cream cones. (The cat is a bit random so I'mma just ignore it.) Not only is it an appealing book cover but the story within is perfect for light spring reading.
Happy Belated Pub Day,  Abby Collette! A Game of Cones is now available.

Disclaimer: An advance copy was received directly from the publisher in exchange for an honest review. Opinions are my own and would be the same if I spent my hard-earned coins.
Title: A Game of Cones
Author: Abby Collette
Published: March 2021
Pages: 352
Edition: Galley
Rating: 🖤 🖤 🖤