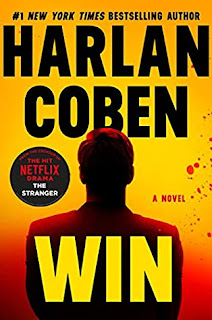 "This isn't a John Grisham man-against-the-system novel—in reality, the little man can't stand up to it." ~ 74%
My Series Sunday pick is Win, the very first book in the new Windsor Horne Lockwood III series by Harlan Coben. Ever since binge-reading the Myron Bolitar series years ago, I quickly established that Win was my favorite side character. His loyalty, genius and wit won me over. To finally see him featured in a series of his own is beyond exciting. I want to scream to his grandmama, "Win made it!"
What happens when a dead man's secrets literally fall into the hands of a vigilante antihero? Over twenty years ago, Win's cousin Patricia was kidnapped by men who murdered her father. She returned after being locked in an isolated cabin for five months. She escaped but so did her captors. That's not all that was stolen. Two pieces of art were stolen and never returned until now...
An authentic Vermeer painting was recovered in a dead man's penthouse. It, along with a Picasso painting, were stolen from the Lockwood estate. It seems obvious to investigators who killed the dead man. Surely it's someone who wanted their items back. A briefcase with the initials WHL3 was also found at the scene. And now the story gets going...Win is the main suspect!
"Articulate." ~ 59%
In this first installment, Win does what he does best: solve mysteries, deal karma, kick ass and look dapper all at the same damn time. There are many references to Myron throughout the book but not one cameo. I was disappointed that Myron didn't make an appearance until I was greeted by another familiar character. I love it and cannot wait for the second novel! Harlan, put the Netflix show writing on hold please. I need more Win like yesterday!
Happy Belated Pub Day, Harlan Coben! Win is available as of Tuesday, March 16.

Disclaimer: An advance copy was received directly from the publisher in exchange for an honest review. Opinions are my own and would be the same if I spent my hard-earned coins.
Title: Win
Author: Harlan Coben
Published: March 2021
Pages: 400
Edition: Galley
Rating: 🖤 🖤 🖤 🖤 🖤