Lit to TV Review: The Lincoln Lawyer & The Brass Verdict 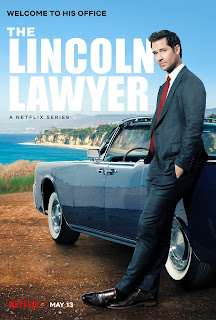 My Series Sunday pick is The Lincoln Lawyer and The Brass Verdict, the first two books in the series of same name by Michael Connelly.
"I was always worried that I might not recognize innocence." ~ pg. 75
Mickey Haller is a criminal defense attorney with two ex-wives and an 8-year-old daughter. He defends by planting seeds, waiting for them to sprout then watching them bloom. Most days are spent in a windowless courtroom so his office is quite nontraditional: a Lincoln. Yes, his office is in the backseat of his car with clever license plates.
We were first introduced to Mickey Haller on the big screen back in 2011. Matthew McConaughey starred as the lawyer and was perfectly cast. So when the TV series comes to Netflix over ten years later, I thought there is no way someone could portray this character as good. Welp—Manuel Garcia-Rulfo did the damn thing and made the character his own!
The TV series follows the second book of the series: The Brass Verdict. I made sure to read both books before binging and it was every bit of goodness! I cannot wait until more.
Title: The Lincoln Lawyer: Movie & The Lincoln Lawyer: TV Series
Author: Michael Connelly
Cast: Manuel Garcia-Rulfo (Mickey Haller)
Network: Netflix
S1 Premiere: May 2022
Episode Time: 1 Hour
Genre: Thriller
Edition: eBooks
Book Rating: 🖤 🖤 🖤 🖤 🖤
Show Rating: 🖤 🖤 🖤 🖤