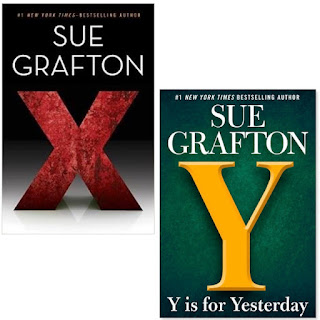 My Series Sunday picks are X and Y is for Yesterday, the last two books of the Kinsey Millhone series by Sue Grafton. In X, P.I. Kinsey Millhone thinks her next case will be an easy $200. Simply locate the son that a glamorous redhead put up for adoption 32 years ago. But then a cop confirms she was paid with marked bills and the client has disappeared.
Meanwhile, the widow of Kinsey's old friend needs help with an IRS audit. This seemingly innocuous task takes a turn when Kinsey finds a coded list. Her investigation leads to an unhinged man. Kinsey quickly becomes the next target.
Family drama continues in Y is for Yesterday. Kinsey is hired for a disturbing case. A group of four teenage boys sexually assaulted a classmate and filmed the attack. Not long after, the suspected thief of the tape is murdered. One of the perps has been released from prison and the missing tape arrives with a ransom demand. Enter Kinsey Millhone for help.
My gripe about the Kinsey Millhone series from the very beginning has been the lack of personal information. Here I am, 25 books later, and I only know a smidgen more about Kinsey. The same minor details are within the first couple chapters. Nothing more. I am the reader that needs to feel a connection to characters. Yet Sue Grafton gave very little.
The mysteries, however, were different every time with an element of danger, suspense and surprise. Fans speculated that Z would give us answers galore with a bombshell mystery. Welp, we will never know. But otherwise, it has been a good run for this series!
Title: X
Author: Sue Grafton
Published: August 2015
Pages: 416
Edition: eBook
Genre: Mystery
Challenge: Perpetual Kinsey Millhone
Rating: 🖤 🖤 🖤
Title: Y is for Yesterday
Author: Sue Grafton
Published: August 2017
Pages: 483
Edition: Hardcover
Genre: Mystery
Challenge: Perpetual Kinsey Millhone
Rating: 🖤 🖤