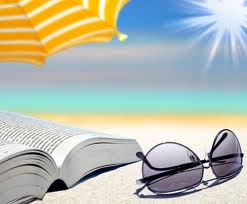 June 21, 2011, is the first day of summer. It is the longest day of the year. After that day, the days start getting shorter because the sun reaches the northern point in the sky. Did you know that? Ok, science lesson over.

During the summer, I tend to rest my brain and read mindless, light books. My brain cells need to be preserved for the manuscripts I read for a living. Besides, I just can't concentrate on heavy, deep story lines while lounging by the pool, sipping Bahama Mamas, and tanning in the sun. Oh yes, I love my brown girl summer tan!

is the June selection for a chick lit book club I'm in. Four aspiring authors meet at a writers conference. Ten years later, they are still friends and collaborate on a novel about their own lives, assuming no one will discover it is really about them. It becomes a bestseller and then a scandal.

Summer and the City: A Carrie Diaries Novel

is the sequel to The Carrie Diaries

. The Carrie Bradshaw we know and love is now in the Big Apple. It's the story of how Carrie met the other Sex and The City women, Samantha and Miranda.

Pinch Me is about a woman who can't believe her good fortune. Despite a family curse, she is happy and engaged. You know the cliche: Pinch me. I'm dreaming. Well, the main character is pinched, then suddenly transported back in time when she was single.

Holly's Inbox: Scandal in the City

is the sequel to Holly's Inbox

. It continues the story of bank receptionist Holly Denham, her friends, family, boyfriend and co-workers entirely in e-mail format.

is the 17th book in the Stephanie Plum series. Although I was disappointed in the last few in this series, I'm still going to read with hopes that Janet Evanovich returned to her original writing. I won't be surprised if Stephanie still hasn't decided between Morelli and Ranger. There are sure to be wrecked black cars, fried chicken and donuts eaten by Lula, and Grandma Mazur gossiping around caskets at the funeral home.

is the 10th book in the WMC series. Of course, I need a touch of mystery during the summer. Hopefully Patterson doesn't disappoint.

is an autobiographical novel told entirely through e-mail, text, and internet exchanges like Facebook. The character's thoughts are revealed in unsent e-mails saved as drafts. It should be a cute, light digital type read.

is about its single girl, Rachel. The book details her wild adventures while ticking off items from her To Do List.

is a selection that my online Twitter book club is reading. It is a coming-of-age story set in Brooklyn during The Great Depression and World War II. It may be too heavy and require more concentration when lounging in a lawn chair, but I'll try to finish.

Chocolate & Vicodin: My Quest for Relief from the Headache that Wouldn't Go Away

has been in my TBR pile for ages. It's an honest memoir of a chronic headache sufferer. I can certainly relate. She's tried drugs like vicodin, chiropractic adjustments, acupuncture, marijuana, chocolate, ice cream, etc. Laughter seems to be the simplest form of treatment.