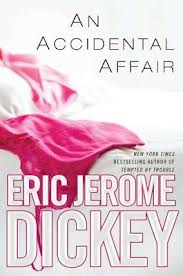 "Even mistakes have anniversaries." ~ pg. 47

When a video hits the Internet and goes viral, it's a wrap. Screenwriter James Thicke is married to movie actress Regina Baptiste. During the filming of his latest script starring his wife, a sex tape is released. Regina is caught in an accidental fuck with co-star Johnny Handsome. James's first reaction is to attack Johnny Handsome, then go on the run.

Under the identity of "Varg Veum," James lands in a ghetto apartment building full of characters and nosy neighbors. Mr. Chet Holder is an older man that immediately latches on to James like a schoolboy meeting the new kid in class. Sweet Isabel is a poised British woman that sees through the lies James tells. Patrice Evans is a hot adulteress mess. Another EJD character, Driver from Drive Me Crazy, plays a supporting role as the loyal employee of James.

The books spans a timeframe of two weeks. So much action happened in the two weeks that it seemed impossible to tie everything up in less than 400 pages. I am convinced there is a sequel in the works, or at least a cameo of James Thicke and Regina Baptiste in a new release.

Like other recent EJD books, it is full of descriptive paragraphs telling a dark story. Dickey delivers whether the scene is suspense, erotica or action. I could easily visualize the scenes that would sizzle on the big screen. Dickey's writing is character-driven and full of lust. I go through withdrawals while waiting for the next Dickey release. This is not his best written book. An Accidental Affair didn't leave me hungry for more but it certainly scratched the itch.

One of the things I look forward to in Dickey's books are the reconocimientos (English translation: recognitions). He thanks the faithful reader, references a conversation with Gideon, and leaves a space for thanking anyone he omitted. Yes, I write my own name in the space, in every book. I appreciate that he thanks Dutton, "the best publishing company in the world" and his new editor. (Great job editing An Accidental Affair, Denise Roy.) Dickey is, by far, my favorite author in cargo pants and long dreads. Keep living on the road and bringing us adventures through fiction.

Check out the video below of Eric Jerome Dickey explaining why a writer needs an editor. Then grab The Accidental Affair from your bookshelf, online bookstore or library and start reading!