"We were four children stumbling around in the broken pieces of our grief and loss." ~ pg. 19

My Series Sunday pick is Flowers in the Attic, the first book in the Dollanganger series by V.C. Andrews. Like so many families today, the loss of head of household is devastating and leaves loved ones struggling financially. Mr. Dollanganger was only 36 years old when he was killed in a car accident. Without his income, young widow Mrs. Corrine Dollanganger realized how much they lived beyond means. Not one single thing was fully paid for; not even toys and their surname belonged to them. So she humbled herself and wrote numerous letters to her mother at Foxworth Hall, pleading for help. Finally the grandmother agreed to let them come and live at Foxworth Hall. This is where the terror begins. In a nutshell, the story is about a bad grandma, a selfish mother and four children hidden away in an attic for far too long. 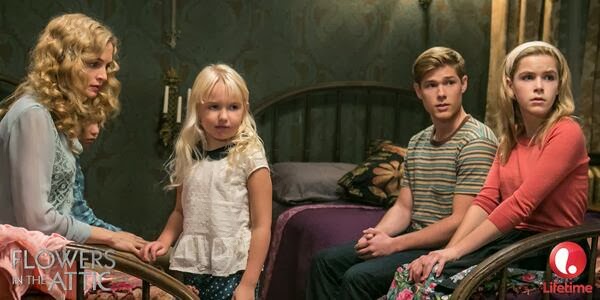 I re-read Flowers in the Attic before Lifetime aired the remake movie last night. The original film was poorly received and had a lot of differences when compared to the book. I had high expectations from Lifetime since its heavy publicity around the remake and the director's promise that the new script is faithful to the book. Well, director Deborah Chow and Lifetime TV, I only found a couple minor annoyances. Other than that, I'll give you two thumbs up. 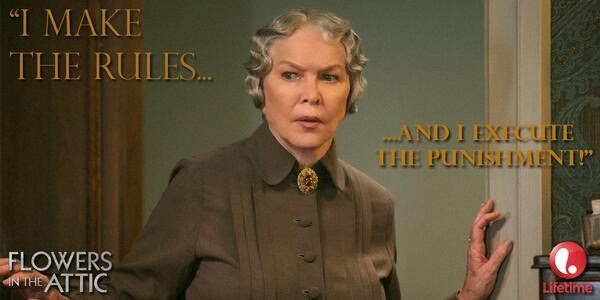 The casting could've been better. Ellen Burstyn wasn't frightening, stern or mean enough. The original grandma never smiled and was far more intimidating. But this grandma looked nice enough to be shoved into the attic without hesitation. Heather Graham as the mother did an okay job. The two older children, Cathy and Christopher, were played by Kiernan Shipka and Mason Dye respectfully; they looked way older than true ages of the characters. The famous hair/tar scene was downplayed; instead of ending up with an emergency haircut, new Cathy looked like she escaped from the attic for a quick trip to Great Clips for a professional bob cut. Perhaps makeup, voice tone and camera angles could have fixed all this. 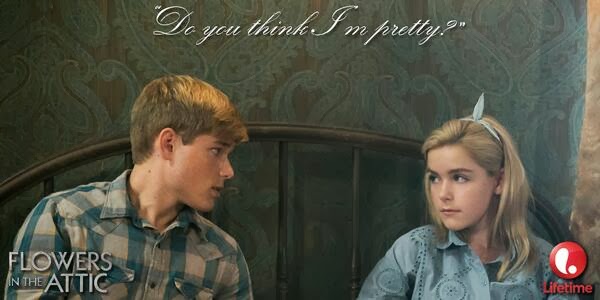 Lifetime's live tweeting with hashtags #FITA and #FlowersintheAttic added to the experience. It was interesting to see the reactions of people watching for the first time, especially those not familiar with the book either. The major consensus was that the family was crazy, the grandma was bad, and the incest story line was disturbing. Looking back, I don't know how so many of us read this book series as preteens. O_O It is indeed a twisted tale.

According to my timeline, FITA had mixed reviews. Some preferred the drama of the old movie; others like myself enjoyed this remake because it was truer to events in the book. (Yes, I am one of those sticklers that believe movie adaptations should closely follow the book.) Immediately after the movie aired, Lifetime announced plans to make a movie of the second book in the Dollanganger series, Petals on the Wind. I am looking forward to watching and re-reading this too.

Speaking of next book in the Dollanganger series, accept this as my Open Letter to ghostwriter Andrew Neiderman. Sir, I understand you and V.C. Andrews estate wishes to keep her legacy alive. It is evident when you add the number of published works since her death. Real fans know V.C. Andrews did not have that much unpublished material. It is high time that you stop making money off of her name. Stop recycling her plot formula. Stop adding modern twists to characters she wouldn't have created. And please stop working on the new book titled Christopher's Diary based on Christopher's point of view of what happened in the attic. FITA is decades old; I don't give a damn now what Christopher's side of the story is. Neiderman, you are the reason I rather re-read old V.C. Andrews books rather than read "her" new releases. Let the series be.


♡♡♡♡♡♡♡
Bookhearts, what are your thoughts on Lifetime's remake of the classic Flowers in the Attic movie? If you didn't watch the premiere last night, check local listings for encore presentation times and watch the movie trailer below.

Posted by Literary Marie at 1:38 PM