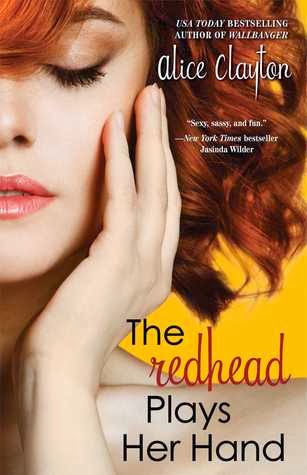 My Series Sunday pick is The Redhead Plays Her Hand, the third book in the Redhead series by Alice Clayton. In Clayton's first novel of the Redhead series, we are introduced to feisty Grace and irresistible Jack. In the second book of the series, Grace and Jack learned how to hide away from the world. In this third installment, the couple is coming into their own independently and together.

The director of Grace's TV series asks Grace to lose fifteen pounds. Curvy Grace speaks up about her struggles with weight and demands of how a Hollywood actress should look. Meanwhile, Jack is voted the Sexiest Man of the Year. But the title means nothing; all Jack wants is to go public with his relationship with Grace. He starts a downward spiral, partying hard and with lots of booze. His actions tempt Grace to set him straight and walk the red carpet with her man.

Alice Clayton's ability to write LOL dialogue and hilarious characters with sexual chemistry is unmatched. It is a treat to readers. Characters Jack and Grace are like the fun couple you love to hang with. I enjoyed this third installment as much as the first two books of the Redhead series. So much so, that I would love to see this couple on the big screen. If you like chick lit, this is a must-read series. Add it to your reading list and be prepared to laugh your curvy butt off.