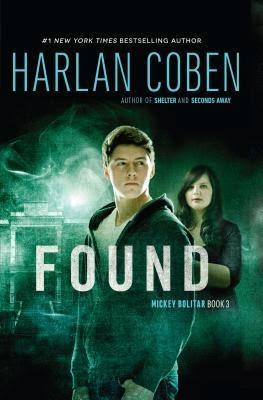 My Series Sunday pick is Found, the third book in the Mickey Bolitar series by Harlan Coben. New school year, new mysteries to solve. Mickey is a sophomore still uncovering dark secrets of his father's death while being supportive of his mother in rehab. Best friend Spoon is in the hospital; other best friend Ema has an online boyfriend that vanished. Rachel is sorting out family issues while keeping Mickey at bay. Meanwhile on the basketball court, Mickey's teammates seem to hate him.

The group of teens have committed themselves to the Abeona Shelter—a secret organization whose mission is to rescue missing children. In finding Ema's online boyfriend, the group of teens discover even more secrets that permanently change their lives and opinions.

"Sometimes, explaining how the universe works is like teaching a lion to read. Reading is real. The lion is real. But he's never going to read." ~ pg. 110

Found is a YA novel with story lines to hold the interest of adults. The ending literally dropped my jaw. O_O Start (or continue) this series without further hesitation. If you are current on the series, please drop a line as I am bursting with theories to discuss.

Author Harlan Coben has #1 bestsellers in more than a dozen countries. Rightfully so. I am guaran-damn-teed to enjoy every bit of any Harlan Coben novel that I pick up. The Mickey Bolitar series keeps getting better. And oh, how I miss Myron Bolitar's series. Give me more!