My Trip to Adele 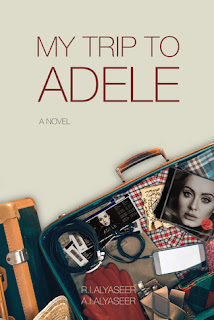 I am fully aware this sounds like a stale joke, but what does an unhappy couple, a divorced mother and a hopeful lover from three different countries have in common? A trip to Adele's concert held in Verona! Elias starts to search for his long-lost love after eight years of separation. Nadia is battling her ex-husband and trying to secure freedom for herself and her only son. Meanwhile, Yaser realizes his marriage is falling apart and he is drifting apart from his wife. This is the story of their lives leading up to a common event: seeing Adele live in concert.

I was a little bit (okay, a lotta bit) disappointed by part of the ending because it took away from part of the story's purpose. The story did not feel complete. However, I realized the lessons learned were conveyed to the reader regardless of the ending I wished for.

Putting my feelings aside about the unsatisfactory ending, I especially loved the format of My Trip to Adele. Every chapter was named after an Adele song and featured lyrics. It was perfectly tied to the story and created nostalgic moments while I was reading. I even took it one step further and created my own soundtrack playlist while reading. After every chapter, I played the song it was named after. Whether intentional of the authors or not, it was a very nice touch tying the storyline of three distinct characters to lyrics. It was as if the story was written based on songs by Adele. Also, how cool is it that the authors are siblings! Another unique combination.

My Trip to Adele was published on September 12, 2016. It is available now for all Adele fans and readers who appreciate a good story of courage. It is meant for those, like myself, that realize it is a small world but something as powerful as music and a shared interest can bring people from all over the world together. Make the world even smaller by reading this book and listening to Adele's 25, 21, and my favorite Adele album, 19. This book is literally the definition of fan fiction.