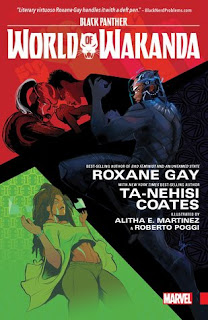 "But you do not yet know what should be shared and what you should keep to yourself." ~ 28%

My Series Sunday pick is the first issue in the Black Panther: World of Wakanda Marvel series by Roxane Gay, Ta-Nehisi Coates and Yona Harvey. Ayo and Aneka are young women recruited to an elite task force trained to protect the crown. It is presented as a love story.

For only $0.99, it was an okay eComic short to get me in the mood for the action-packed, highly anticipated superhero movie release. But the story has holes causing Marvel amateurs like myself to be lost. I am not already familiar with any of the characters; it would have been helpful to describe the setting more and at least Ayo and Aneka's past since this is the first issue of World of Wakanda. Although the illustrations were detailed and eye-catching, it was still just okay overall. For these reasons, I will not continue with reading #2-6 in the comic series. I much rather see it live and in color.

Yes, it is Black Panther opening weekend! I went to Wakanda and enjoyed every second. So much so, that I want to see the movie again in total cosplay. By the looks of social media, my people showed up and showed 👏🏾all 👏🏾the 👏🏾way 👏🏾out!

If you have not seen Black Panther, read the deets below then immediately close this browser window, open your preferred movie app, buy show tickets, logoff the internet, and head to the nearest movie theater. Thank me later!