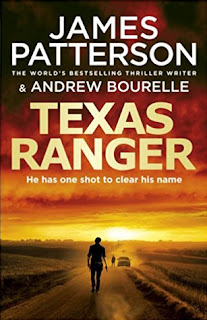 "The chorus says that cowboys are never at home and they're always alone, even with someone they love." ~ pg. 91

Texas Ranger was recommended for fans of Alex Cross and Jack Reacher. I absolutely love those two characters in their own right so those are tough shoes to squeeze on swollen toes. When I am out of town, I try to read books in the same setting...so Texas Ranger it is!

Rory Yates is fresh off a case that jeopardized his chances of promotion. He is forced to take some time off and recharge with family in their small hometown. He finds a horrifying crime scene upon his arrival, along with an accusation. He is named a suspect in the murder of his ex-wife.

"That pesky word: jurisdiction. When is anyone going to learn that when there are lives on the line, it shouldn't mean jack shit?" ~ pg. 111

Like a true fuck rules rebel (Jack Reacher), he cannot sit by and let the case solve itself. The detective in him (Alex Cross) starts asking questions and conducting his own investigation. Yates risks his badge, his career and his reputation among everyone he loves to find the killer and clear his own name.

Three days is all it took for Rory Yates to win me over. I wish Patterson would make this a series!