Daddy Was a Number Runner 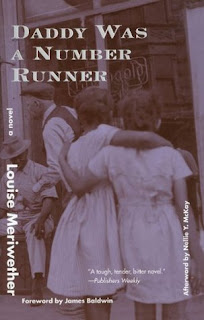 "'It's a shame,' Daddy said, 'the way the racketeers can change a number anytime they want to as if the thousand to one odds against hitting ain't enough for them.'" ~ 40%

Daddy Was a Number Runner is a classic fiction account of a year in the life of a 12-year-old black girl growing up in Harlem during the Great Depression (1934). Francie Coffin feels trapped by race and class. She lives in an urban ghetto yet she strives to experience life outside the streets of Harlem. Within the city, it is survival of the fittest. Everyone, including Francie and other children, play the numbers. Small winnings keep their hope alive to hit big and move. That hope is what keeps people going, making it another day to spend another dollar.

This coming-of-age story has its funny moments but is mostly sad. As readers, we see that small glimmer of hope just isn't enough. We see their dreams not being fulfilled. We see their days blend into one big routine. And it hurts when the book ends with a simple yet powerful word spoken by Francie herself: "Shit."

"But that sweet feeling hung on and I loved all of Harlem gently and didn't want to be Puerto Rican or anything else but my own rusty self." ~ 79%

I had no idea Daddy Was a Number Runner, with a Foreword by James Baldwin, existed until it was mentioned in My Mother's Life in the Detroit Numbers. Thank goodness it was. I had the pleasure of buddy-reading it with Chickadee during our flight travels. We share the same overall review: The philosophy behind the plot could have been explored more. It was good while reading, but nothing stood out days after turning the last eBook page. 🤷🏽‍♀️