Series Sunday: The Passage (Part One) 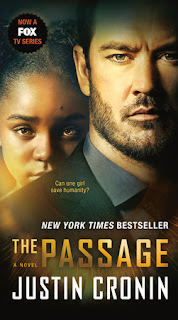 My Series Sunday pick is The Passage, the first book in trilogy of same name by Justin Cronin. The Fox TV adaptation airs on Mondays 9/8c. I had no clue this book existed before the television series started. I stay away from the undead and science fiction genre. I admittedly rolled my eyes when friends insisted, "But this is different!" Nine (9) episodes and 232 pages in...color me hooked!

What really won me over is a video that young actress, Saniyya Sidney, posted to Instagram. I felt her humble excitement as she discovered her face on the cover on bookstands. How awesome is that! So I ordered the TV Tie-in paperback edition immediately, added the show to my DVR schedule then posted my own Instagram video.


"How long would a human being live if there were no cancer, no heart disease, no diabetes, no Alzheimer's? And we've reached the point where we need, absolutely require, human test subjects." ~ pg. 46

I don't want to get spoiled in the TV series and the paperback is a thick book at almost 900 pages. It is separated into five (5) sections that I will use as guidelines to post reviews. Therefore, each part will have its own rating. So welcome to Part One: The Worse Dream in the World! The theme is survival. Amy Bellafonte is an orphan, abandoned by her mother at age six. She is pursued and imprisoned to be a key player in a government experiment. Special Agent Brad Wolgast senses something endearing about the young girl when he tracks her down. Instinct tells him to abandon his bosses' mission and protect her from the shadowy bad guys. But the experiment, like a show, must go on.

I absolutely love the chemistry between Amy Bellafonte and Special Agent Brad Wolgast (played by Mark-Paul Gosselaar). The book goes into more detail as to the lengths Agent Wolgast goes to save Amy's life. There are tear-jerker moments and also times when I cheer aloud for a small victory. The two-hour television finale was nothing short of amazing, as is first section of the book.