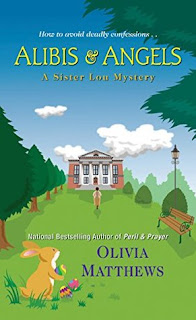 "Women don't have what it takes to make the hard decisions necessary to run an organization, much less a town." ~ pg. 156

My Series Sunday pick is Alibis & Angels, the third book in the Sister Lou mystery series by Olivia Matthews. Louise "Lou" LaSalle is Briar Coast's Sleuthing Sister. Her amateur team includes her handsome no-longer-single nephew, Chris, and investigative reporter, Shari. The trio finds themselves solving a murder in order to prevent another.

Sounds like someone didn't give up murder for Lent. The mayor's director of finance, Opal, died from a slip-and-fall down the steps of a municipal building. To most, it seems like a freak accident. But the mayor believes it was done on purpose and that she was the real target. Opal was wearing Mayor Heather's coat and driving the mayor's car. After all, it is a critical election year and she's been receiving threatening letters too.

"Falling is the second leading cause of accidental deaths, not just in this country, but around the world." ~ pg. 38

Like the two previous books in the Sister Lou mystery series, there were characters I did not like then suddenly pity when they're accused of murder (Sister Marianna) or intended for murder (Mayor Heather). Somehow, author Olivia Matthews makes me put aside my feelings for the character and get wrapped into their story. Alibis & Angels was slower and unnecessarily longer but still a light cozy mystery worth reading.

I'm sad to be caught up on this series. What amateur sleuth am I supposed to read about now?! But you—my dear bookhearts—are lucky. You can begin reading the Sister Lou mysteries! In fact, I encourage you to go ahead and download the eBook(s). A cozy mystery for less than the price of a bagel with cream cheese and bottled water. You're welcome!