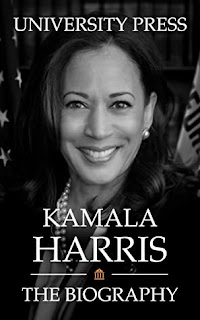 "Harris has a flawless campaign history, winning every position for which she has run." ~ pg. 27
My Series Sunday pick is Kamala Harris: The Biography, a short book in the biography series by University Press. I haven't yet found the time to read Vice President Elect Kamala Harris' memoir but I wanted a CliffsNotes version of her life. I wanted an accurate telling of her upbringing, early career, political beliefs, qualifications and what lead her to today.
"Many of the positions she has held have been marked as firsts—first woman, first African American, and first American of Indian descent." ~ pg. 5
Kamala Harris is the first of many! Born to a mother from India (Shyamala) and a father from Jamaica (Donald), she grew up in a Baptist church and built a reputation for being tough on crime. As a District Attorney, she targeted crime and fought for justice from inside the system. Cousin-in-my-Head Kamala has a strong background and this biography is a good brief portrait of our new Vice President of the United States.
Title: Kamala Harris: The Biography
Author: University Press
Published: August 2020
Pages: 37
Edition: eBook
Rating: 🖤 🖤 🖤 🖤 🖤