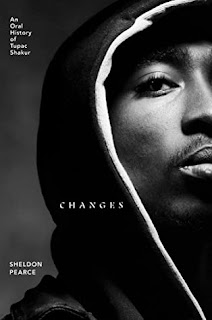 "He had a kind of vulnerability that, with a little encouragement, he would drop some of that armor." ~ 9%
Changes is an oral history of Tupac Shakur's life and legacy, perfectly timed for release of the 25th anniversary of his death and 50th anniversary of his birth. The title references a song of Tupac's that became an anthem in worldwide protests last year. It became so popular (again) that it charted on iTunes. More than 20 years later and Tupac's music of systemic racism, policy brutality and mass incarceration still applies.
Sheldon Pearce delivered one of thee best accounts of Tupac's life. Instead of a traditional biography, he interviewed dozens of people to offer an oral history. He didn't include tons of well-known celebrities either. Readers are gifted with rare insight and fresh stories from lesser-known people close to the rapper/actor/activist. We hear from a high school teacher, music executive, childhood friend, fashion designer, a juror and a pen pal.
With music-related books, I like to play the songs mentioned. This practice made Changes even more enjoyable to read. He was a legend before his time and the lyrics remain relevant today. What a genius and true talent Tupac was. Well done, Sheldon Pearce, in telling his story in an unconventional way!
Happy Belated Pub Day, Sheldon Pearce! Changes is now available.