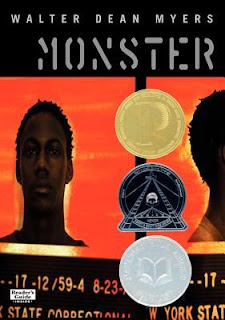 "Think about all the tomorrows of your life." ~ pg. 205
The prosecutor calls him "Monster." His name is Steve Harmon, a 16-year-old on trial for murder. A Harlem store owner was shot and killed in a robbery-gone-armed. Steve served as the lookout allegedly.
The young amateur filmmaker transcribes his trial into a script. Wonderful way to tell this story; hence why Walter Dean Myers is one of the greatest writers of our lifetime. The story is told in scenes complete with movements, cuts, entrances and fade-ins.
If left unsure of Steve's innocence at the end, you are not alone. It is such a short read that I browsed through again looking for clues, a confession, a show of guilty, something. Then realized Walter Dean Myers included a prequel in the 20th Anniversary edition titled The Get Over. It gives more insight into events leading up to the robbery and Steve's moral mindset.
Also included in the special anniversary edition is a Reader's Guide, Author Questions, Walter's Own Story, his passion for writing and why he writes for young adults and an excerpt of the graphic novel. Well worth the couple extra bucks.
Monster is a black lit classic written by James Baldwin in 1974. Here we are 40+ odd years later and the American justice system is still flawed with an overflow of wrong convictions. The movie really drives this point home. Highly recommend!
Title: Monster
Author: Walter Dean Myers
Director: Anthony Mandler
Cast: Kelvin Harrison Jr. (Steve); ASAP Rocky (King); John David Washington (Bobo); Dorian Missick (Asa Briggs); Jennifer Hudson (Mrs. Harmon); Jeffrey Wright (Mr. Harmon); Jennifer Ehle (O'Brien); Paul Ben-Victor (Petrocelli)
Book Published: April 1999
Movie Released: May 2021
Pages: 281
Movie Time: 1 Hour,  Min
Edition: Paperback
Book Rating: 🖤 🖤 🖤 🖤 🖤
Movie Rating: 🖤 🖤 🖤 🖤 🖤