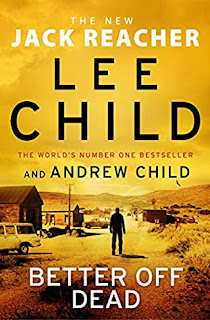 "They said they'd cut my eyelids off, to make sure I saw everything." ~ 28%
My Series Sunday pick is Better Off Dead, the 26th book in the Jack Reacher series by Lee Child and now his brother, Andrew. Pick a fight with Reacher and soon find out you are better off dead. Hence the perfect title!
In a huge plot twist, the latest installment of the series begins with our main character dead on a slab in a morgue. Panic set in immediately since I am nowhere near ready for this series to end. The story rewinds to a few days prior when Reacher is doing what he does best—roaming west with no destination—when he comes upon a Jeep crashed into a tree with a woman slumped over the wheel.
Enter Michaela Fenton, an army veteran turned FBI agent searching for her twin brother who is mixed up with some dangerous people led by a mysterious man named Dendoncker. He rules from the shadows and rarely comes into sight. But leave it up to Reacher to seek Dendoncker out and help find a missing person.
"There was nothing to suggest the place was owned by a murderer. That it was the hub of a smuggling operation." ~ 58%
For those unfamiliar, I am reading the Jack Reacher series in the most untraditional way (backward). I read every new book soon as its published (S/O to the publisher for an advance copy); in between new releases, I read from the beginning of series. Each book may be read as a standalone and the mysteries do not overlap so it is not confusing. There is nothing much to Reacher's personal life that needs to be revealed in chronological order far as I can tell. And might I say, this series continues to impress me with its thrilling storylines, attention to detail, descriptive action and consistency.
Don't let the page count fool you! I know 520 pages sounds like a big ass commitment but I assure you Better Off Dead is fast-paced, full of action and a really good mystery that will keep you interested. I turned the pages faster than Reacher could disarm a threat. It only took a few days for me to read the entire book and I actually want more! This brother duo is doing an awesome job co-authoring what I now call the Jack "Fucking Fearless" Reacher series.
Happy Early Pub Day, Lee and Andrew Child! Better Off Dead will be available Tuesday, October 26.

Disclaimer: An advance copy was received directly from the publisher in exchange for an honest review. Opinions are my own and would be the same if I spent my hard-earned coins.
Title: Better Off Dead
Author: Lee and Andrew Child
Published: October 2021
Pages: 520
Edition: Galley
Rating: 🖤 🖤 🖤 🖤