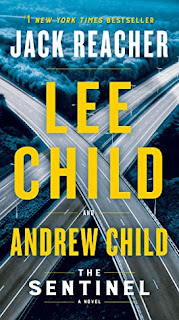 "An emergency response. To the Russians having a new weapon that could totally shred our election systems. Everywhere in the country was vulnerable. No results could be trusted." ~ pg. 197
My Series Sunday pick is The Sentinel, the 25th book in the Jack Reacher series by Lee Child. Per usual, Reacher is roaming the world with no destination in mind. Wherever the road may take him. One morning he ends up in a town near Pleasantville, Tennessee. There is nothing pleasant about this place.
In broad daylight with swift motion, Reacher witnesses an ambush. It was four against one so he intervenes and helps the stranger. He turns out to be an IT manager recently fired after a cyberattack. The whole town blames him but he claims to be innocent and intent on clearing his name. There's always more to the story and Reacher has nothing better to do than feed his intrigue. Add in murder, conspiracy and a cover-up and The Sentinel is a solid 5-heart read.
"Gone down with a migraine. I knew he would. This always happens when he works too hard. He won't take breaks. He won't eat. Won't drink. And then, bang. He's face down on the floor." ~ pg. 213
I unfortunately know the feeling! Luckily a migraine did not hit while I was reading this bestseller. It kept my mind spinning with possibilities of an ending while trying to solve the mystery too. The subject is very relevant considering how many companies have been hit with cyberattacks and alleged election rigging in the great USofA.
I don't know how Lee Child still comes up with exciting plots so deep into a series. This is #25 and a page-turner! (Other authors should take note!) Perhaps it is the new collab with younger brother, Andrew, and his fresh ideas/passion for fiction. Keep it coming!
Title: The Sentinel
Author: Lee Child
Published: October 2020
Pages: 283
Edition: eBook
Rating: 🖤 🖤 🖤 🖤 🖤