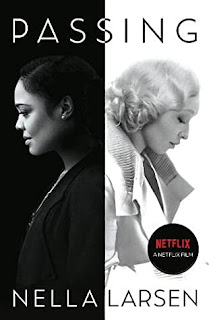 "To pass successfully is to perform so seamlessly that nobody appreciates your craft." ~ pg. 12
Picture this: New York City in the 1920s. Hot summer day. A refined woman seeks breezy refuge in the grand tearoom of Drayton Hotel. Across the room, a blond woman stares her down. A bold re-introduction and a unique laugh reunite the women.
Childhood friends Irene and Clare are both light-skinned Black women. One of them has chosen to cross the color line while the other woman is passing. Irene lives as an upper-middle class Black woman with her husband and dark children in Harlem. She is very active in the community and embraces her culture. While Clare is married to a racist white man who has no idea of her Black heritage. In fact, he jokingly calls her "Nig." Oh, if he only knew!
The story in Passing is moreso about the women forced to re-examine their relationships: with each other, with their respective husbands, with fear and with the truth. Nella Larsen penned a novel that earned her a place in the Harlem Renaissance. And nearly a century later, the story and its themes are so relevant that it is now a major Netflix movie.
How appropriate that the Passing movie is filmed in black and white. It was a constant reminder of the stark contrasts among the characters and their state of mind. Images of the beautiful modern actresses Tessa Thompson and Ruth Negga, oh-so-handsome actors Alexander Skarsgård and André Holland, and the striking backdrop of New York City draw your interest to the screen.
Although we live in a time when passing is a thing of the past, it is still a touchy subject to read about and discuss. The effects of passing and a light complexion weigh heavily on the Black community and continue to fool whites' perception. Passing isn't just about skin tone either. It's about seeing clearly and, well...you'll have to read/watch to learn more. Both the book and movie carry a sad tone that leads to a shocking "what just happened" ending.
What a timeless novel and wonderfully shot film! Needless to say, I recommend both to all Bookhearts. Then watch the very first episode of But Have You Read the Book? featuring host Uzo Aduba to see how this story went from book to screen.
Title: Passing
Author: Nella Larsen
Director: Rebecca Hall
Cast: Tessa Thompson (Irene); Ruth Negga (Clare); Alexander Skarsgård (John); André Holland (Brian)
Book Published: April 1929
Movie Released: November 2021
Pages: 121
Movie Time: 1 Hour, 38 Min
Edition: eBook
Book Rating: 🖤 🖤 🖤 🖤
Movie Rating: 🖤 🖤 🖤 🖤