Series Sunday: Under Color of Law 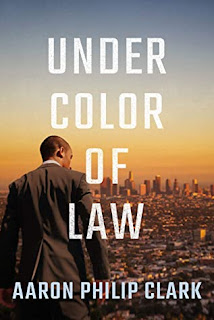 "I make being a police officer sound storybook—the sanctified knight gallivanting through the countryside, facing down the dire and dark. It's some potent panty-peeler, but it couldn't be further from the truth." ~ 5%
My Series Sunday pick is Under Color of Law, the first book in the Trevor Finnegan series by Aaron Philip Clark. This new main character is a good cop but hasn't been a good man in a long while. He doesn't show emotion. He knows the department has a diversity problem. Yet he somehow climbed the ladder fairly quickly. And why is that?
Black rookie cop Trevor "Finn" Finnegan wants to become the top-ranking officer in the LAPD. His goal is to fix the broken department. So his fast-track promotion to detective in the coveted Robbery-Homicide division puts him closer to achieving his goal.
The city of Los Angeles calls for police accountability. In the midst of racial justice protests and senseless killings by cops, the body of a Black police academy recruit is found. Of course, Finn is tasked to investigate the murder. The suspenseful story spins into a web of corruption, violence, race and cover-ups.
"The only thing that separates a cop and a convict is getting caught." ~ 69%
First of all, I fell in like with Finn when he drank his second cup of Earl Grey. Now this is a character that knows his tea! I liked him even more when he realized the burden of knowledge is crushing. Do you know how long it takes people IRL to figure this out? Yet we have a fictional man of color that is in tune with his intellect and faults. Hello, Under Color of Law and the Trevor Finnegan series!
Aaron Philip Clark, I am your new fan. Your description of a warm night's air is so detailed that I could feel the summer energy through my Kindle. Your creation of a strong Black character is solid. And most of all, your depiction of cops and police departments is what most of us are thinking but not saying aloud. Thank you for not making this first book in series the end of Finn's career or life. We need him in the book series world.
Under Color of Law is so. damn. good! I am looking forward to Blue Like Me late in the new year.
Title: Under Color of Law
Author: Aaron Philip Clark
Published: October 2021
Pages: 298
Edition: eBook
Rating: 🖤 🖤 🖤 🖤 🖤