Series Sunday: V is for Vengeance 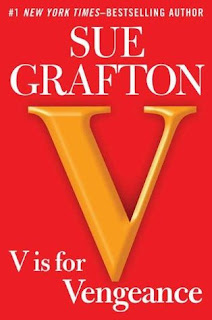 My Series Sunday pick is V is for Vengeance, the 22nd book in the Kinsey Millhone series by Sue Grafton. A spoiled kid deep in gambling debt. A woman found dead from presumably jumping off a bridge. A shoplifting ring working for the Mob. A dirty cop. A wandering husband. A powerful business. A sinister gangster. And finally, a widower desperate for answers...and this is where our Private Investigator Kinsey Millhone comes into play for her services. Y'all...it is a lot!
"I'd like to say I'm a big fan of forgiveness as long as I'm given the opportunity to get even first." ~ pg. 35
Listen. I was not kidding when I read U is for Undertow earlier this year that I was not excited about picking up the next book in this series. I rated the previous book one lone heart too. Le sigh. It was too much going on to keep track. The writing was all over the place. The mystery had no direction whatsoever.
Had Grafton given up on the series at this point? It reads as if she knew the end was near so purposely filled 400+ pages with a bunch of ideas that did not flow. It was a spiderweb of jibberish. Obviously I am too far into the series to give up (#22) but yeah, it is time to wrap up Kinsey Millhone. Only a couple more letters left in the alphabet!
Title: V is for Vengeance
Author: Sue Grafton
Published: November 2011
Pages: 437
Edition: Hardcover
Challenge: Perpetual Kinsey Millhone
Rating: 🖤