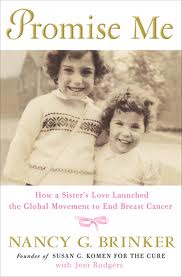 Promise Me is three (3) books in one: a memoir, a guide to running a foundation, and a set of inspiring stories about the struggle against breast cancer. In the spirit of awareness month, I chose this selection because it is written by Nancy G. Brinker, the founder of Susan G. Komen For The Cure. It is the well-known brand for the fight against breast cancer. I've raced for the cure; I've worn the pink ribbon daily; I've donated. It is high time that I read about how this global movement launched.

Part I ~ Suzy
Suzy and Nancy were sisters, best friends and inseparable confidantes. Even as little girls, they had giving hearts and big plans. Throughout the years, both sisters had breast issues discovering lumps and getting needle biopsies. It was a common inconvenience. Then Suzy was diagnosed with breast cancer in 1977. Three years later at the age of thirty-six, she died. Back then, nobody talked about early detection or mammograms. It was still viewed as a shameful illness. Suzy made her sister Nancy promise. Promise to end the silence. Promise to raise money for research. And promise to cure breast cancer one day. The foundation was born. The mission became even more important when Nancy herself was diagnosed with breast cancer in 1984. Luckily, she survived.

Little Known Fact Excerpt: The earliest documented cases of breast cancer appear in the Edwin Smith Papyrus...Warm tumors in the breast were likely the result of an infection. The remedy: cauterization. Hard, cold tumors deep within the breast, "There is no treatment."

Statistic Excerpt: Breast cancer is the leading cause of cancer death for American women between forty and fifty-five years of age.

I'm not sure how to describe the first part of Promise Me. It describes the sisters' childhoods and Suzy's struggle. It is not easy reading, especially if you know someone who suffered from breast cancer...be it a survivor or a lost one. It was the first account that I have read but certainly not the first I've experienced or heard of.

Part II ~ Evolution
Starting and maintaining a foundation takes a lot of work, compromise, diligence and vision. The second section is about the evolution of SGK. It also gives a glimpse into Nancy's personal life of learning how to let go. Check out the video below of Ambassador Brinker kicking off Breast Cancer Awareness Month 2011.


Part III ~ Revolution
The third section addresses the controversy around SGK. Specifically, when one of its corporate sponsors (Curves) withdrew support and denounced the foundation because local affiliates made grants to local Planned Parenthood chapters. Brinker reassures readers that 75% of donations serves local women. She goes on to explain that said grants "supplied breast health counseling, screening, and treatment to rural women, poor women, Native American women, many women of color who were undeserved -- if served at all -- in areas where Planned Parenthood facilities were often the only infrastructure available." Somehow, the grants were perceived as SGK funding abortions. -__-

The last section also discusses how President Obama awarded Ambassador Brinker with The Presidential Medal of Freedom, the highest civilian honor in the United States. The book ends with an informational breast cancer timeline and helpful resources.

We have come a long way from the ancient Egyptian days. Breast cancer is no longer a death sentence. It is no longer hush hush. Talk about it openly. Raise awareness. Early detection is the key. Do self-exams regularly. Feel your boobies! Remind friends and family to get a screening/mammogram. If you know someone who struggles with the illness, give her support and hope. Give her a hug. Let her know she is not alone in the fight against breast cancer. We all know the catchy saying: Save the tatas! And take the I Promise pledge as shown in the video below.