Series Sunday: A Wish and a Prayer 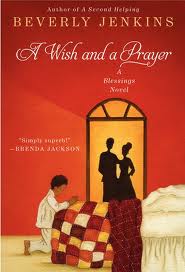 My Series Sunday pick is A Wish and a Prayer, the 4th book in the Blessings series by Beverly Jenkins. This is my fourth visit to Henry Adams, Kansas. Henry Adams is the historic town founded by freed slaves that wealthy divorcee Bernadine Brown purchased off of eBay. Oh, how I've missed these characters and this beautiful, growing town.

Preston "Brain" Miles is happy living with the Colonel and Mrs. Payne. But he is still curious to know about his birth family. His biological maternal grandmother has been found and is more than willing to pay him a visit in Henry Adams. But can she be trusted? Or will this turn into a bad situation like when Crystal's birth father kidnapped her last year?

Rocky is still the manager of Dog and Cow, the town's diner. But life has made her skeptical and strong. She can pitch a softball, run a business, break down an engine and fight. The inner softer side of Rocky wants to be loved and wants to trust another man, but it's risky opening her heart again. The town's teacher, Jack, is determined to be the man in Rocky's life and prove that love is worth a chance.

Meanwhile, Bernadine had good intentions by hiring lawyers on behalf of farmers. However, some of the farmers are angry about the lost opportunity to lease their land and sell crops. Will Bernadine's plan to build a grocery store in Henry Adams fix this misunderstanding?

And good 'ole Riley, the former Mayor, is still claiming his pet hog, Cletus, acted in self-defense. Bless his heart for trying to prove it in court. I can do without reading more about this character and his precious hog.