The Confessions of Rick James: Memoirs of a Super Freak 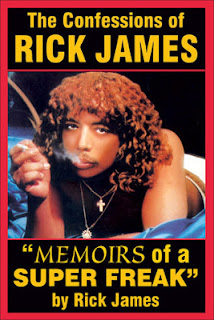 Let me preface this review by saying I am a fan of the super freak, Rick James. I jam to his music. In fact, I am listening to Bustin' Out and Dance Wit Me on repeat while writing this review. I miss his live performances and interviews. The man was the punk funk master! Him and Teena Marie were the best collaboration since peanut butter and jelly. So it was only fitting that I read Rick James' confessions. What better time than during Black History Month? So let's get into the review.

Rick James penned his memoir in 1993 while sitting in a 6x8 cell in the Los Angeles County Jail. He dedicated it to "all the Super Freaks, Super Geeks, and Super Tweaks." The memoir starts from the beginning. He was born James Ambrose Johnson Jr. in 1948. He was the third oldest of eight children. It goes on to tell one of his happiest memories, when he lost his virginity at the age of nine, and even when he started chippieing (messing around with drugs). The memoir of course also describes his music career. All of his songs are about personal experiences and feelings.

Rick James' childhood, fame, drug use, felony convictions and rendezvous with women are discussed in this tell-all. All of the names and events in the book are true. He doesn't change names to protect the innocent because he simply didn't give a motherfuck.

The Confessions of Rick James is everything you imagine it would be. C'mon, it is the Memoirs of a Super Freak! Enough said.