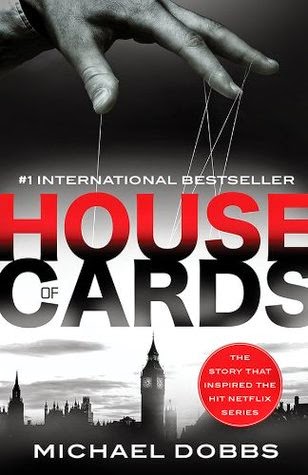 "Politics. The word is taken from the Ancient Greek. 'Poly' means 'many.' And ticks are tiny, bloodsucking insects." ~ pg. 187

My Series Sunday pick is House of Cards, the first book in the Francis Urquhart series by Michael Dobbs. Francis is the Chief Whip. He must know the vote at all times, which gives him reason to know every secret in politics. The thrilling part is Francis will betray them all to become Prime Minister. Mattie is a young reporter with a knack for finding out the real story behind headlines. Mattie stumbles across a web of deceit and financial corruption, risking her life to reveal the truth.

House of Cards is a harsh dark tale of the corruption, manipulation and greed in politics, no matter the country. Just look at the book cover. The characters in House of Cards are puppets and Francis holds the strings. His unapologetic ambition is unmatched. His initials are FU for a reason.

The author, Michael Dobbs, is a member of the British House of Lords. He is Britain's leading political novelist and is a senior adviser to Prime Ministers. I'd say he is a credible source in knowing the sacrifices made and discipline shown in politics. Perhaps this is why most of the content in the novel went over my head. I struggled through the lingo and Parliament references. I stifled many yawns while reading.

The international bestseller is too wordy and politic-y for my taste. But the show is a must-see! You'll never view Scandal or The White House the same. I will not read the other books in the series but cannot wait to watch the third season. Kevin Spacey is the perfect actor for the role of Francis Underwood (still initials FU). Check out the trailers below of S1 and S2 of the Netflix original series inspired by the novel House of Cards.