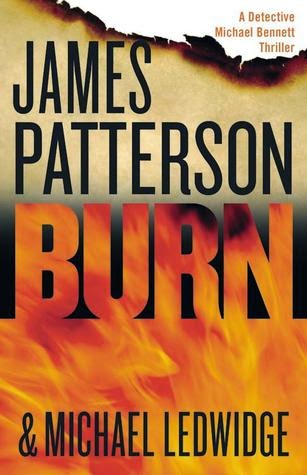 My Series Sunday pick is Burn, the seventh book in the Detective Michael Bennett series by James Patterson and Michael Ledwidge. The detective and his family are finally coming home to New York City after being forced into Witness Protection. Instead of being rewarded for bringing down a crime lord, he is demoted to a mayoral pet project in Harlem whose mission is to help the city's most vulnerable victims. Political bullshit basically.

Meanwhile on the home front, the moment I've been dreading since book one of the series finally happens. A biological parent of one of Bennett's ten adopted children shows on the doorstep threatening to take custody. EEK! As if working NYPD isn't enough stress.

"That you were always just one knock on the door from being taken away." ~ pg. 317

The last couple books of the Detective Michael Bennett series had me literally hanging on every word, tipping my chair over in suspense. But Burn was not thrilling. Sure it had its uh-oh moments but nothing of the same danger level. The commercial for Burn is way misleading. It is NOT the hottest book. It seems books five and six were the peak of the series and it is going downhill. Please prove me wrong, Patterson and Ledwidge. Please.