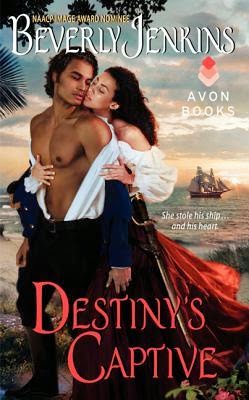 My Series Sunday pick is Destiny's Captive, the third book in the Destiny series by Beverly Jenkins. Noah is the youngest Yates son. He loves sailing the seas with no plans to fall in love and start a family on land. Pilar comes from a family of forgers and thieves. It is in her blood. So when she chose Noah's ship to steal, it was pure business. Until Noah left her with a promise to find her. True to his word, Noah went on the hunt for the pirate woman who stole his ship Alanza. What neither of them expected was what would happen when that day came.

I cannot find fault in any novel Beverly Jenkins writes. She is one of my absolute fave authors. She introduced me to the historical romance genre and writes it like no other. It is clear from the descriptive scenes that she did her research on Cuba, General Maceo, Spain, and blacks in Latin America. How can I not love reading fiction and learning history?

If you read the previous two books in the Destiny series, you will be happy to know that brothers Logan and Drew, their respective wives Mariah and Billie, and their mother and Max are characters in Destiny's Captive. Yes, you'll get updates on them all as you read about Noah and Pilar. For those who haven't read the previous two books in the series, you can read Destiny's Captive as a standalone but I would not suggest it as you'll be spoiled.

Promise me, Beverly Jenkins, that you will continue to write such great passionate, page-turning historical romances. It is bittersweet this series has come to an end with this final third book. However, I am left satisfied with the Yates boys and their lives.