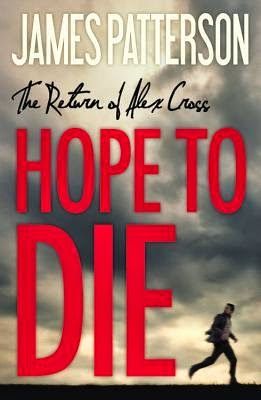 My Series Sunday pick is Hope to Die, the 22nd book in the Alex Cross series by James Patterson. Alex Cross has the worst luck when it comes to love. In his own words, every woman he's ever loved has ended up dead or traumatized. His first wife Maria died in a drive-by shooting. His youngest son's mom was taken hostage. Although rescued, it damaged their relationship. And now his second wife, Bree, has been taken and is possibly dead.

"But grief and loss have a way of crippling the best intentions even in the strongest of minds." ~ pg. 40

Hope to Die picks up where Cross My Heart left off. Detective Cross is being stalked by a psycho named Thierry Mulch. He took Cross's family—wife Bree, grandmother Nana Mama and his three children. Frightening. Patterson created a good psycho character on paper. But not when it came to carrying out acts. Not when it came to making the reader feel the panic of Alex searching for his missing family before they are killed off one by one. Where was the thrill in thriller? Where was the evil in the antagonist?

"Mulch is diabolical. He's very smart, thinks long term, and is cruel and audacious, which strikes me as narcissistically evil." ~ pg. 48

Le sigh. I don't even know how to say this book fell flat. What a disappointment. It had the potential to really be a thriller but instead I finished with, "Oh. Okay." Chalk it up to be another recent Patterson dud.