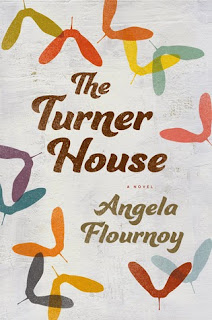 "Scrutinizing too closely why Viola and Francis had not stopped at two, or seven, or even ten children felt like wishing a sibling never born. And yet, each child thought about it." ~ pg. 80

Francis Turner is a former preacher and truck driver. He is the patriarch of the Turner family, a husband to a strong wife, Viola, and father to thirteen children. Mr. and Mrs. Turner worked hard to move from Arkansas up to Detroit. Their hard-earned money bought a home on Yarrow Street, located on the east side of Detroit.

"The story of black Detroiters and corned beef is nearly as fraught with racial tension as the story of the Pilgrims and corn." ~ pg. 151

Fast forward fifty years later and Francis has passed away; Viola is ill. Despite the decline in house values and increased abandoned lots in the neighborhood, the Turner house on Yarrow Street still stands. Like so many other houses in the area, it is only worth a tenth of its mortgage. The siblings come together to decide whether to let go of the family home.

As the children grew up in the Turner house and later went about their adult lives, they didn't interact or keep in touch with each other very much. Although when there is an urgent matter, all thirteen of the children show up and show out. I am glad the author did not overwhelm readers with individual stories of each child. Instead, Flournoy wisely chose to focus on only a couple of the siblings and both parents.

"It was a particular sort of Turner weakness: self-sabotaging self-righteousness masked as self-reliance." ~ pg. 76

I really enjoyed the individual story lines of Cha-Cha (oldest sibling) and Lelah (youngest sibling). But there is another main character that stole my heart: the city of Detroit. Yes, my hometown! It was so nice to read a story with familiar streets, places and events.

"...because she could remember when a black family couldn't even buy a house in Grosse Pointe thanks to their now infamous point system." ~ pg. 307

The Turner House is so beautifully written. It held me from the first line to the last word. I finished reading almost two weeks ago and a couple of the characters are still lingering in the fiction suite of my brain. During the Black Lit Chat on Twitter, I asked the author if other Turner children will be featured in future books or better yet if this could be a series. Flournoy answered she is not sure at this point but still thinks about one of the characters. Hmmm, I can guess which one. I would love to read about other members of the Turner family tree.

Pssst! Angela, girl, great job of bringing the stories about your father's twelve siblings and growing up on Detroit's east side to the pages of your debut novel. It is clear you did research and I appreciate how you didn't focus on tragedy but instead reality of the city's economy, gambling and haints. The Turner House is a look into the American dream and a feel-good story about pride and family ties. This fiction story can be appreciated by many bookhearts whether you are a fan of black lit, family/generational drama or just a damn good book. I recommend The Turner House to any and all. Do add this novel to your TBR pile. Thank me now AND later.