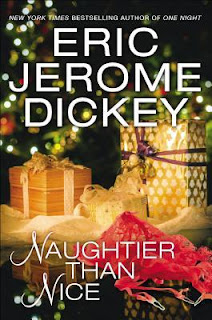 My Series Sunday pick is Naughtier Than Nice, the sequel to Naughty or Nice by Eric Jerome Dickey. The McBroom sisters are back in this hot sequel set during the Christmas holiday. This romantic adventure picks up almost right after the first book ends but it is no longer a fairy tale. Frankie is being stalked after breaking up with her already-married boyfriend. Tommie's relationship with Blue isn't perfect and Livvy can't get over her husband's affair.

"I'd entered into a relationship in trust and had exited on the back of a lie."

Umpteen books later and it still impresses me how EJD can write so well in a woman's point of view. These sisters were going through some things thangs and he captured the right reactions. He accurately described why a black woman changes her hair, how she wants to change her life, her demand for respect, her happiness and mental hurricanes. *slow clap* Well done, Dickey.

"When a woman doesn't feel valued, it makes her susceptible to the charms of other men. A woman would engage in a short sale and change neighborhoods in hopes of gaining a sense of community."

EJD bookhearts, mark your calendar for October 27, 2015, when this hot sequel is expected to be published. I recommend reading Naughty or Nice if you haven't already to get the background stories. There are pop culture and police brutality references that relate this fiction to real life. Meanwhile, the McBroom sisters are a trip and a half! It is definitely a book you will enjoy.