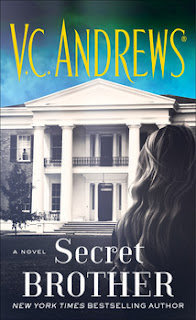 "A family was like a fortress, I thought. When one important member died, there was a big hole through which everything bad could have an easier time getting to you." ~ pg. 43

My Series Sunday pick is Secret Brother, the third book in The Diaries series by V.C. Andrews. One ER. Two boys. One elderly man's choice. Grandpa Arnold lost his grandson Willie in the same ER where a young boy is dropped off, poisoned and left for dead. Wanting to help, Grandpa Arnold hires an investigator to find the boy's family but hits a dead end. He takes this as a sign and moves the boy into his wealthy estate to recover and raise alongside his grieving granddaughter Clara Sue.

Clara Sue is appalled and ashamed of her new secret brother. How could her grandfather try to replace the biological brother she suddenly lost? What exactly is this boy's past? Where is he from and whom does he belong to?

"I lost my little brother, and this...weird kid is living in his room, wearing his clothes, taking everything that was his, even his name!" ~ pg. 197

Flowers in the Attic holds a special place in the fictional series portion of my heart. The Dollanganger family goes on for generations and this is a new branch of the family tree. Just when I warmed up to the new characters—distant relatives—featured in the previous two (2) Diaries books, here comes more new folks. Secret Brother is narrated by Clara Sue, a smart good girl that deserves a break. Her parents were killed in a boating accident. Her grandmother passed away and her brother was hit and killed by a drunk driver while riding his bike on the sidewalk. Then here comes a strange little mute boy, literally overnight, who is being raised as her secret brother. It's a bit much for an adolescent girl.