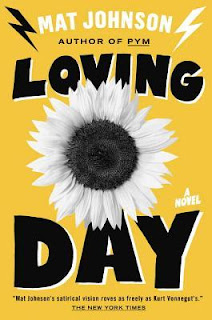 "You've got a duty. To let her know who she really is, who we are. What blackness means, not the pathology you see on TV." ~ pg. 43

Warren Duffy had no choice but to return to America. He just got divorced. He had to sell his comic book shop. And his Irish American father died leaving behind a mansion in the ghetto that is already inhabited by two crackheads that may or may not be ghosts. He is a man who feels he has nothing.

At a comic book convention, Warren comes face-to-face with a teenage girl that resembles his black mother and white father, both now dead. It turns out the 17-year-old girl, Tal, is his daughter and she's been raised to believe she is white. Warren and Tal adjust to their newfound life together building a father-daughter relationship, learning their culture and balancing life in a mixed-race cult.

Listen. When I read a book described as "frequently hilarious," I don't take it seriously. My humor is not always on the same level as critics. However, this was not the case in Loving Day. There were so many "frequently hilarious" moments that I started quoting them to my Chickadee. Well written colorful comedy! The writing is so descriptive that I could picture every scene and dialogue as if I were in the utopia. Bookhearts, I have to warn—if you read this book in public as I did, be prepared to answer people asking what's so funny.

Loving Day will be a very good first impression of author Mat Johnson if you haven't read his works before (Pym, Incognegro, Dark Rain and more). They are good novels with sometimes a comical theme of race exploration in America.

Loving Day isn't all about jokes, fun and games. It is a moving story of whites and blacks, fathers and daughters, the living and dead, crackheads and sobers. It is also a story about opposites and a lesson on how to adapt to change. Read it!

Posted by Literary Marie at 6:59 PM