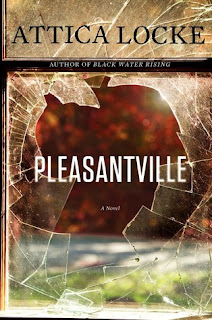 My Series Sunday pick is Pleasantville, the follow-up book to Black Water Rising by Attica Locke. Fifteen years later, lawyer Jay Porter returns to fight one last case. He gets entangled in the political world and learns how far shady politicians will go to win.

Jay Porter is ready to quit. Even though he won his case against Cole Oil, he hasn't seen a dime of the money thanks to appeals. His environmental law practice is no longer in business and his personal life is changing.

"For, yes, they endured the worst of Jim Crow, backs of buses and separate toilets; and yes, they paid their poll taxes, driving or walking for miles each Election Day, waiting in lines two and three hours long. Yes, they waited. But they also marched." ~ pg. 11

While driving his daughter to school, he hears of a case hitting close to home. A girl goes missing on Election Night in the Pleasantville neighborhood—a planned community of new homes built specifically for black families of means and class located north of Houston. Being a single father and noticing this makes three girls now who have gone missing in Pleasantville alerts Jay. When a local close to the election is arrested, Jay reluctantly serves as defense attorney.

I usually don't read series out of order; I am a stickler for starting in the beginning. However, I wanted to read Pleasantville before the year was over because the description of murder, political corruption and a close-knit affluent black neighborhood lured me in. Even though I skipped right over the first book lawyer Jay Porter was featured in, Black Water Rising, I was not lost. There was enough backstory to keep me informed about the characters and his history in and out of the courtroom.

Pleasantville was 345 pages long but the story steadily moved. It reminded me of House of Cards episodes. It is not definite Jay Porter will return in future books for a series. However, I plan to read the first book Black Water Rising to get more familiar with good 'ole Jay Porter the lawyer.