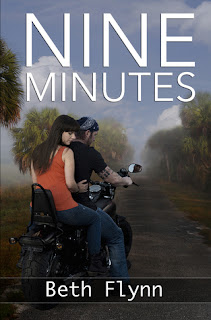 My Series Sunday pick is Nine Minutes, the first book in the Nine Minutes series by Beth Flynn. To put it bluntly, this is the story of Ginny, a 15-year-old girl who'd been abducted by a notorious motorcycle gang/club (MC). Her life is forever changed as she lives on the MC's base where everyone goes by an alias and lives by the loyalty code. Grizz is the terrifying, massive yet handsome leader of the MC. But when it comes to Ginny, he is tender and loving.

So begins the emotional tale of Ginny and Grizz. I spent majority of the book wondering if and how Ginny will be rescued, if Grizz will slip up and allow her to escape or if she will fall in love with her kidnapper. Bookhearts know that it is not a rare occurrence when I root for the bad guy in novels but this one? Whew!

Nine Minutes was a book recommended to me when it was first published over one year ago. I downloaded the NOOKbook and it sat in my eLibrary for quite a while until the person randomly asked one day, "Hey, how did you like Nine Minutes?" EEK! I had forgot all about it. So on a quiet morning, I started reading and didn't move until I was done. Then I immediately downloaded and started reading the sequel Out of Time (to be reviewed soon).

Yes, it was that good. Yes, it pulled me in. Yes, it was a true page-turner largely because it is a genre and subject I am not familiar with and never read before. I didn't know biker romance novels were a thing. In fact, it piqued my interest to binge-watch Sons of Anarchy. (So hooked on SAMCRO and Jax!)

Anyhoot, if you are looking for something to read outside of the norm, I recommend Beth Flynn's Nine Minutes series. But be warned it is not for the faint of heart. It is not a googly-eyed romance story either. There is crime, violence and dark secrets.

Posted by Literary Marie at 1:30 PM