Series Sunday: Out of Time 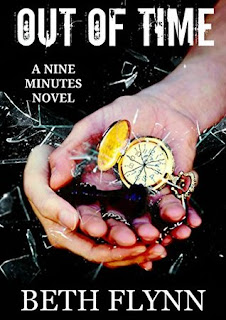 My Series Sunday pick is Out of Time, the second book in the Nine Minutes series by Beth Flynn. It continues the gripping story of Ginny, who was once abducted by the massive yet handsome leader of a notorious motorcycle gang and later made his wife. Grizz has been executed for the abduction of Ginny and other crimes. Ginny is now remarried with children. But family and friends can't move on with their life because a tangled web of deceit and secrets unravel after Grizz's death. The façade of normalcy crumbles.

"Tell me a happy story where things don't hurt and everybody is nice." ~ pg. 10

Every single outstanding question I had was answered in Out of Time. Just when I thought there was no more to the story, Beth Flynn came out of the woodwork with plot twists and backstory that blew my mind.

If you enjoyed other biker novels or watched Sons of Anarchy (still hooked on SAMCRO and Jax), then this is the book series for you. Be prepared for a page-turner that you will not be able to put down until finished. Do NOT read Out of Time until you've read the first book Nine Minutes. There are so many twists and character developments that will only be understood if read consecutively.

As I stated last week when I reviewed book one, if you are looking for something to read outside of the norm, I recommend Beth Flynn's Nine Minutes series. But be warned it is not for the faint of heart. It is not a googly-eyed romance story either. There is crime, violence, strong language, dark secrets and hard truths.