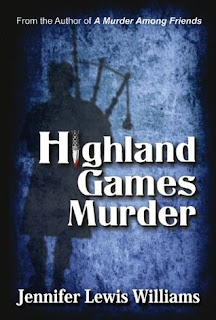 "The perpetrator could be an enemy, a colleague, an internet gamer, or a former lover, she thought." ~ 12%

The Highland Games are held biennial in a small Texas town. It is May 2010 and Carl Geiger, the director of the Dallas County Criminal Law Library is caught up in a game of whodunnit. Preoccupied with showcasing the skills of dancers, pipers and drummers, Carl finds himself accused of murdering a man he hates. In fact, they were seen arguing only hours before the piper was found stabbed to death. Uh oh!

Throw in a host of colorful characters like a shady employee, drug dealer, vengeful ex-girlfriend, unusual stripper and attractive sheriff. Highland Games Murder makes for a full story with well-developed characters, the right amount of suspense and enough clues for readers to try solving the murder while reading. I was filled with doubt, second-guessing my suspect until damn near the last chapter. Now that is an engaging novel!

Dare I say I enjoyed the plot of Highland Games Murder more than Williams' debut novel, A Murder Among Friends. Both are great reads and I am looking forward to what this author publishes next. Bookhearts, add Jennifer Lewis Williams to your murder mystery authors-to-watch list. In the meantime, catch up reading her two (2) novels so I can chat about these mysteries with you.