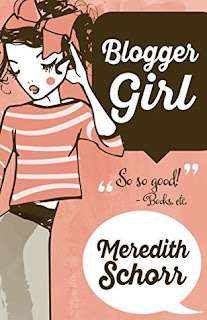 My Series Sunday pick is The Blogger Girl, the first book in the series of same name by Meredith Schorr. By day, Kimberly is a legal secretary in a Manhattan law firm. By evening, Kimberly runs a blog dedicated to chick lit. As her luck would have it, one of her most hated high school classmates released a new hot book that landed in Kimberly's inbox to read/review.

"Then again, it was my day job as a legal secretary at a mid-sized New York City law firm that paid my $1800 rent, not my voluntary—albeit immensely more satisfying—side gig as a chick lit book blogger." ~ 3%

Made me laugh? Yes. Fast-paced? Yes. Hard to put down? No. So so good? Um, nope. I so wanted to like this book. In the very beginning, the main character was basically me in fiction form. She had a job to pay the bills but her passion was her book blog, Pastel is the New Black. She loves reading chick lit, maintained good relationships with publishers, authors and agents, and had a good blog following. But after a while, I was no longer feeling Kimberly. Particularly when her high school nemesis came on the scene. Something shifted where the main character and the plot was no longer interesting. I am quite disappointed and will not continue with this series.