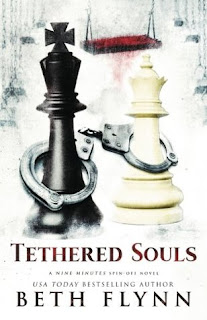 "Some people and relationships aren't meant to be. They're like dead skin. After a while, if you don't slough it off, it starts to itch. When it starts to itch, it annoys and distracts you." ~ 77%

My Series Sunday pick is Tethered Souls, a spinoff novel of the Nine Minutes series by Beth Flynn. Miriam D. Hunter is her name far as everyone's concerned. No one could know her parents' dark background, hence why they left South Florida and never looked back. Death row, murder, robbery, rape and a court case were best kept secret.

Childhood friends, Mimi and Christian, haven't seen each other in years. Not since Mimi's family moved away and they promised to keep in touch. Mimi kept her bargain of the deal and wrote letters but they went unanswered. Until he shows up demanding attention and with secrets of his own.

"The need to possess her, to own her, overwhelmed him with a soul-exposing intensity." ~ 4%

I almost feel ashamed for rooting for these relationships that began as planned abductions. The motorcycle club life is not for the faint of heart. The girls can be too submissive and the guys can be controlling. But I can say their love is on a whole 'nother level that I can't tear my eyes away from reading their stories. I don't understand how to explain this genre: sharp romance? All of their souls bound. *shakes fist at Beth Flynn* Damn, you make characters that I hate to love!

Readers of the Nine Minutes series will be treated with a story of Grizz and Bear's kids. Those unfamiliar with the series can still enjoy Tethered Souls as a standalone novel. Add to your TBR!