Series Sunday: R is for Ricochet 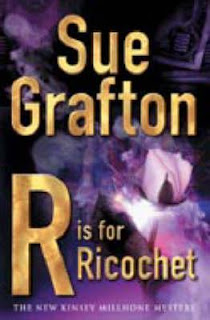 My Series Sunday pick is R is for Ricochet, the 18th book in the Kinsey Millhone alphabet series by Sue Grafton. She is hired for a simple task: drive Reba Lafferty home from her incarceration at the Californian Institute for Women. But Kinsey is soon fighting to prevent rebellious Reba from breaking parole. In the midst, Kinsey discovers that Reba isn't 100% guilty. She actually took the fall for her boss/lover in a money laundering scam. Has Reba learned her lesson or is she out for bitter revenge?

"Revenge is your hurt me and I grind you underfoot until you wish you were dead. Getting even restores the balance in the Universe." ~ pg. 327

It doesn't even bother me that us readers only know the basic deets about main character, Kinsey Millhone. They are repeated in the first chapter of every single book in the series. Yet it remains all we know. Divorced, 30-something single woman, no immediate family. Just a lone PI, thoroughly accomplished liar that manages to get involved in sticky situations. And you know what? I am totally okay with that now. It makes the mystery stand out even more.

"I was beginning to see that operating in high gear was a means of protecting myself." ~ pg. 237

I am so glad I've stuck to this series and committed to reading them all. I am even more pleased that I don't have to wait over a year for the next installment. Cheers to hopping on the bandwagon late!