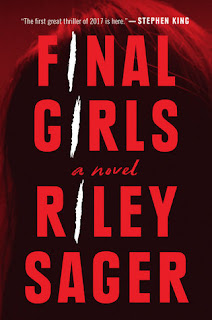 "Because here's the thing about details—they can also be a distraction. Add too many and it obscures the brutal truth about a situation. They become the gaudy necklace that hides the tracheotomy scar." ~ 4%

They say our brain conveniently blocks traumatic memories. Such is the case for Quincy Carpenter. She has dissociative amnesia following a tragic massacre from ten years ago, leaving her the sole survivor. She screamed louder and ran faster than her unfortunate friends when a patient, whom escaped from the asylum, brutally stabbed them in the woods at Pine Cottage. It made national news and now Quincy is a member of the "Final Girls" club—a group of similar survivors.

Lisa lost nine sorority sisters when a college dropout killed them with a knife. Sam fought for her life when a man in a potato sack murdered people at the Nightlight Inn. Even after the media groups them together and an interview with Oprah falls through, the three girls never meet in person. Sam went into hiding. Quincy runs a popular baking blog, and Lisa—the first and most vocal of the Final Girls—wrote a book about moving on.

"Final Girl is film-geek speak for the last woman standing at the end of a horror movie." ~ 5%

Their lives are separate until Lisa is found dead in her bathtub from an apparent suicide, and Sam shows up at Quincy's door intent on reliving the past. Unsure of whether to trust Sam or not, Quincy lets her guard down. They bake together, drink together, and patrol Central Park as vigilantes. But when Lisa's death is ruled a homicide, the remaining Final Girls side-eye each other while unraveling the truth and what really happened at Pine Cottage. 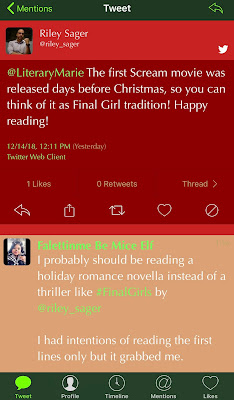 'Tis the season for cute holiday romance novellas but instead I chose to read this thriller. I had intentions of reading the first lines only but the story grabbed me and didn't let go until page 343. I tweeted about it and the author, Riley Sager, made a brilliant point: the first Scream movie was released days before Christmas so I should think of it as a Final Girl tradition! I like the way he thinks...and the way he writes.

Final Girls has the right amount of suspense, well-paced chapters that alternate between the past and present, and characters full of mystery. The horror wasn't too grotesque because you all know I'm a squeamish punk. But the scenes were descriptive enough to draw my own images in mind, like it was a vivid horror film. I was invested enough into the story to carry it everywhere and read during free moments. Dare I name Final Girls as my final pick for Top 10 Books of 2018? It certainly meets the mark and stood up to all the hype.